At the start of each round, each player lays out three cards face up in front of her to create her post piles; places a face-up stack of ten cards, seeing only the top card, next to her post piles to create her blitz pile ; and holds the remaining cards in hand face down.

Playing at the same time, each player tries to empty her blitz pile. If she has a 1 on the top of any face-up stack, she plays it to the center of the table to create a Dutch pile. If she has a 2 of the same color as any 1 on top of a Dutch pile, she can place the 2 on the 1. All cards on a Dutch pile must be played in ascending order and must be the same color. A player can also play from the blitz pile onto a post pile, or from one post pile onto another, but only if the numbers are in descending order and the boys and girls alternate.

If a player can't play anything, she can reveal cards from the stack in her hand, counting them out in groups of three, then laying them face up while revealing only the top card. She can play this top card onto a Dutch pile or post pile as long as she meets the rules for doing so.

As soon as a player empties her blitz pile, the round ends. Each player scores 1 point for each of her cards among the Dutch piles, then loses 2 points for each card remaining in her blitz pile. Players then sort all the cards and play another round. As soon as at least one player has at least 75 points, the game ends and the player with the most points wins.

Note that while the Dutch Blitz: Expansion Pack allows for play of Dutch Blitz with up to eight players (by having differently colored card backs), it is also a standalone game and is therefore listed as a separate edition of Dutch Blitz despite the name. I Would Fight The Dragon 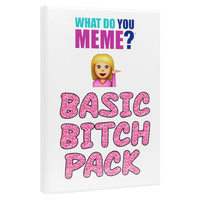 What Do You Meme? Basic Bitch Pack Once Upon a Time - Storytelling Game