A  massively popular American "bag chuck" game in which players take turns to toss bean bags at an inclined platform with a 15cm hole near the top.  Cornhole is massively popular in the USA and regularly played as a "tailgate" game at barbecues before major sporting events.  There is even an American Cornhole League televised on Foxsports.

Our Competition boards are the official regulation size used in American Cornhole competitions, measuring 1.2m x 0.6m.  The back of the board is raised to an official playing height of 30cm via folding birch support

Our premium Cornhole sets are crafted with a beautiful birchwood frame and poplar plywood playing surface which has been finished in a smooth clear varnish.  Unlike basic or cheaper cornhole boards, our design is such that the playing surface is neatly recessed into the frame for a neater premium look and enhanced durability.  Each board also has a  chunky hemp rope handle for transport.

Double Board sets come with a pair of full sized Cornhole boards and 8 heavy duty canvas Cornhole bags - 4 black and 4 khaki. The  first board also has a neat storage drawer underneath for storing the bags when not in use.  The Cornhole bags comply with American Cornhole Association size and weight requirements and weigh 450g each.

Single board sets are also available however instead of playing end to end players must collect the cornhole bags and walk back to the throwing mark at the end of each round.  We also have more compact 3/4 size "standard" Cornhole sets available 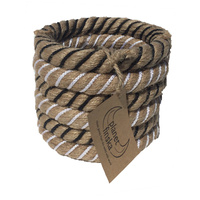