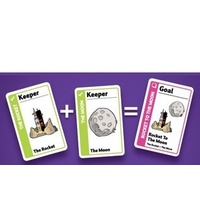 This special edition of Fluxx is based on the main Fluxx game but slightly simplified. Packaged in a tuck box (not our standard 2 part box) and simplified to contain only the four basic card types (Keeper, Goal, New Rule, and Action), 73% of the cards are fundamentally unchanged from the current Fluxx 4.0/Fluxx 5.0 game sold in game stores. The more complex cards in the main game have been removed, and 11 cards that have been seen before in other versions or as promo cards have been included. There are 16 all new cards, most of them Goals that combine long time Keepers in fun new ways. The Keeper artwork has been updated with new illustrations by Michael Hays. Fluxx (Special Edition) and Fluxx (found in game, toy and book stores) are both great entries into the Fluxx universe. For the full line of specialty versions of Fluxx, be sure to visit your favorite local neighborhood hobby game store! Draw a card, play a card. Seems simple enough, right? But that's when the fun starts! Fluxx features New Rule cards that change the rules of the game, Goal cards that change the object of the game and Action cards to create some chaos! Match your Keeper cards to the current Goal to win! Just when your opponents think they’ve got you beat, you change the rules and win the game!