In 1493, Christopher Columbus discovered the eastern-most island of the Great Antilles. About 50 years later, Puerto Rico began to really blossom - through you!

Which roles will you play in this new world: Prospector? Governor? Settler? Trader? Whatever you do, you have one goal: To achieve the greatest prosperity and highest reputation! Who will have the most fruitful plantation? Who will build the most impressive buildings? And, who will earn the most victory points?

The most critically acclaimed board game of the last twenty years, Puerto Rico continues to wow people with its brilliant mechanics. Each player utilizes different roles (Mayor, Captain, Settler, Trader, Prospector, Craftsman, or Builder) to score the most victory points with their colony. Players can act on every turn of the game, allowing them to choose between shipping goods for points or building an impressive city. Players must manage their colonists, erect a variety of buildings, build up their plantation, and sell or ship goods. With dozens of options, Puerto Rico is a streamlined game that can be played in about an hour and handles up to five players. The Battle at Kemble's Cascade 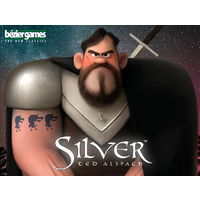