Imagine a game that becomes the life of the party! Combine, overlap, and even animate the special transparent cards in this fast guessing free-for-all. Is that icon actually a flag pole? Or is it a golf club, a shark fin, or even an ostrich's neck? With 61 unique icons and more than a thousand prompts, it's a game as big as your imagination!

A great game transcends language and culture. Such is the case with Imagine, which came to us from Japan via our French publishing partners, Cocktail Games. We’ve played many guessing games, but what stands out about this one is the collection of transparent icon cards that, when combined, allow you to convey your chosen subject without saying a word! After a couple of rounds, you’ll be amazed at your ability to communicate using the universal language of creativity. Take pictures of your most inspired visual clues and share them with us via Facebook, Instagram or Twitter. We’ll create an album of our favorites! 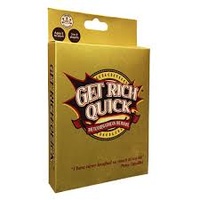